Press enter to begin your search

Barrow Valuation Group is a boutique organization focused on providing real estate solutions for often complex and unique assignments, as needed by public and private sector clients. Our approach to each assignment is to provide expedient service while maintaining a consistent and exceptional product that exceeds industry standards, at a competitive fee.

In the pursuit of maintaining an outstanding level of service, Barrow Valuation Group has access to comprehensive market data sources and research capabilities. We incorporate a rigorous internal review process to guarantee the accuracy and reliability of our conclusions.

We adhere to the requirements and guidelines of the Financial Institutions Reform Recovery and Enforcement Act (FIRREA), and the Uniform Standards of Professional Appraisal Practice (USPAP). At the core of our organization, we strive to exceed those expectations by maintaining the standards and continuing education requirements of The Appraisal Institute and the Royal Institute of Chartered Surveyors.

Michael Barrow, MAI, MRICS is the founder and managing director of Barrow Valuation Group. He was awarded the prestigious MAI designation by the Appraisal Institute in March 2002, and launched his Atlanta office later that year under the umbrella of Commercial Valuation Services, Inc. (CVS). In 2016, Michael launched his rebranded company with his own namesake, Barrow Valuation Group. This new chapter for the organization refocused its mission, fostering adaptive valuation solutions in an ever-changing environment. In January 2017, Michael was awarded the MRICS designation by the Royal Institute of Chartered Surveyors. He holds Certified General Real Property Appraiser licenses in the States of Georgia and Florida.

Michael has worked diligently to develop an outstanding reputation in the Atlanta region for clients such as Cadence Bank, First Citizens Bank, Georgia Banking Company, Georgia Primary Bank, Regions Bank, Truist Bank (formerly BB&T), Walmart, and Wells Fargo. Under Michael’s leadership, his office has been named four times in the list of “Atlanta’s 20 Largest Commercial Real Estate Appraisers,” published by the Atlanta Business Chronicle. In 2017, Michael launched a satellite office in Miami, Florida. With 34 years of commercial real property valuation experience, Michael Barrow has been involved in the valuation of assets that total in excess of $7 billion.

Our primary coverage areas include the Metropolitan Areas of Atlanta and Miami. Secondary coverage extends throughout the Southeastern U.S. 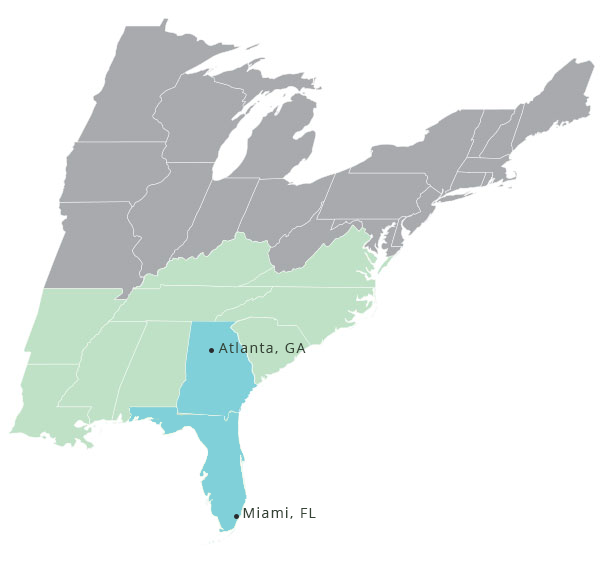